Domestic flights: when provinces infect each other

Since the start of the pandemic, international flights have been the area of concern. Yet domestic flights represent 85 per cent of air traffic in Canada, according to a CBC/Radio-Canada analysis. Tens of thousands of people, some of whom are carriers of the virus that causes COVID-19, travel across the country every week without testing or quarantine. 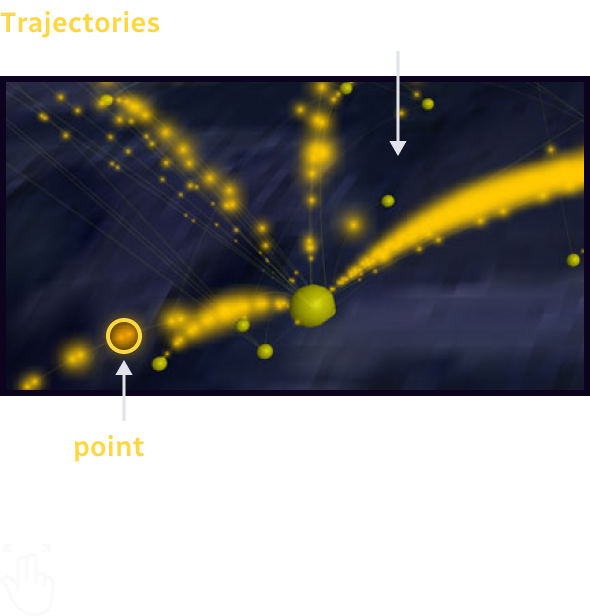 Travellers arriving from abroad by plane must undergo tests and quarantine (with exceptions). But in the past year, just one in seven planes landing in Canada have come from abroad.

In April, more than 3,000 planes took off each week from one Canadian city to land in another without their passengers being tested. And with the exception of the territories, the eastern provinces and Manitoba, no quarantine was required, either. A temperature measurement is mandatory at major airports, although this measure is ineffective in detecting COVID-19, according to Health Canada.

Restrictions on domestic air travel are only one of the tools to help stop the spread of the virus, but without them passengers can carry the virus with them when they fly. From April 26 to May 8, 2021, an average of 17 flights per day carried at least one passenger who later tested positive for COVID-19 and travelled during a period when they may have been infectious, according to a "non-exhaustive" list from the federal government.

The most recent reports released by airports in Toronto, Calgary, Vancouver and Montreal show that more than half a million passengers boarded or disembarked from a domestic flight in February 2021.

Select a province to see the 10 airports with the most departures and arrivals.

"We know that there are contaminations coming from international sources, but we also see them between provinces," said Jeffrey Joy, a researcher specializing in evolutionary genetics at the British Columbia Centre for Excellence in HIV/AIDS. With his team, he dissects the genetic code of viral samples to reconstruct the geneaology of the virus causing COVID-19 in Canada.

In an analysis soon to be published and which CBC/Radio-Canada has consulted, Joy and his colleagues demonstrate that strains of the virus that causes COVID-19 from Quebec, Ontario and British Columbia have been transmitted to other provinces (without distinction as to the mode of transport). Incomplete information also hinders the drawing of a national portrait. Some jurisdictions, notably Alberta and Saskatchewan, make little genetic data publicly available.

"It's vital we avoid introducing new variants which are rising in the rest of the world into Canada," said Joy. "But we also want to prevent existing variants from spreading between provinces."

A third wave hit several provinces in April. The number of people hospitalized in intensive care has doubled in Canada, reaching more than 1,400 people, a record. Quebec has maintained a curfew, Ontario has issued stay-at-home orders and British Columbia has banned travel between its regions. But the planes continued to fly.

Alberta reported 32 new cases of COVID-19 per 100,000 inhabitants every day on average in April — a level no other province has reached since the start of the pandemic.

During the same period, more than 300 planes took off each week from the province to land elsewhere in the country, including Toronto, Vancouver, Kelowna and Montreal.

April was also a difficult month for Ontario, with an average of 26 new cases per day per 100,000 people, the provincial record since March 2020.

At the same time, more than 250 domestic flights were leaving Ontario each week. The main destinations were Montreal, Calgary, Vancouver and Edmonton.

The third wave did not spare B.C., with 19 new cases per 100,000 individuals per day on average in April — a record here too — and an increase in cases of the P1 variant, which first appeared in Brazil.

Some 300 planes flew each week from the west coast to the rest of the country. Many of them were headed for Calgary. The other main destinations were Edmonton, Toronto and Montreal.

Quebec, for its part, resisted the third wave better than the other provinces. The number of daily cases nevertheless climbed to 15 per 100,000 inhabitants in April, on average.

Each week, 175 planes left Quebec for a Canadian airport. The main destinations were Toronto, Vancouver and Ottawa. But the province also connects with the eastern provinces. Many flights also went to Halifax and Moncton.

Although some Canadians have to move for work, "we know that people continued to travel for reasons that were not essential," said Kelley Lee, professor of health sciences at Simon Fraser University in British Columbia and expert in cross-border measures during pandemic. “It clearly helps moving variants across the country. We don't have to wait five years to do all the analysis. We can see that happening."

While both international and domestic flights fell drastically in the spring of 2020, domestic flights have gradually recovered over the past summer and reached a peak during the holiday season. The number of domestic flights in April 2021 is 66 per cent lower than in 2019, showing that air traffic has not returned to its pre-pandemic volume. But compared to April 2020, at the very start of the crisis, it is 42 per cent higher.

Number of daily flights landing in Canada since Jan. 1, 2020

The B117 variant corresponds to a variant detected for the first time in the United Kingdom, B1351 in South Africa, P1 in Brazil and B1617 in India.

On April 19, Ontario closed its land borders with neighbouring provinces, prohibiting non-essential travel. After this announcement, Quebec also imposed land controls at its Ontario border. But the number of flights landing in these two provinces has not budged. As airports are under federal jurisdiction, the provinces have no power over air transport.

A week later, Ontario Health Minister Christine Elliott called on Ottawa to make screening of domestic travelers mandatory before boarding. A few days later, B.C. Public Safety Minister Mike Farnworth echoed Elliott's request while reacting to a Globe and Mail analysis on the number of domestic flights with confirmed cases of COVID-19 on board.

We asked the office of Prime Minister Justin Trudeau if measures to regulate domestic flights were planned. The response, by email, said that provinces "have the power to determine who can enter their territory" and that the federal government was always ready to help the provinces and territories in the fight against COVID-19.

"There is a disconnect, an illogicality between the management of the crisis at the national level and at the provincial level,” said Benoît Barbeau, professor in biological sciences at the University of Quebec in Montreal and expert in virology.

He recommends a more structured and consensual approach between the provinces which, so far, have managed their respective crises individually. On the other side, the Atlantic bubble, a uniform response from the eastern provinces, limited the number of travellers from other parts of the country and imposed quarantines on those arriving by air. Nunavut, Yukon and N.W.T. also imposed a quarantine for domestic travellers. Most recently, Halifax Airport President Joyce Carter said she was ready to test all passengers arriving from outside the province with rapid on-site testing.

Flights originating from outside the Atlantic bubble and that have landed there, compared to 2019

"But it's not easy," warned Barbeau. "Considering the number of domestic flights, the screening of all travellers would require an incredible number of tests to be carried out. Would people pay for their tests? Should they be tested upon departure and arrival?" And we must not forget land transport in the equation, he pointed out. More measures would probably reduce the number of trips too, he said.

"The time to act is now because we do not yet have sufficient vaccination coverage to prevent a significant rise in infections," said Marie-France Raynault, head of the department of public health and preventive medicine at the Centre hospitalier universitaire de l’Université de Montréal. In her opinion, testing and quarantine should be required depending on the destinations. “For example, at the moment, things are blazing in Alberta and there are variants. So for a person returning to Quebec from Western Canada, there should be the same requirements as for international travellers,” she said. “If you are thinking of going skiing, having to quarantine when you return is a deterrent."

In Europe, many checks are carried out between borders of different countries, while the distances are comparable to our interprovincial movements, she emphasized. "Just because we are a big country doesn't mean we are safe."

“Traditionally, we have thought about our international borders as the place where we stop viruses or infections from coming through,” said Kelley Lee from SFU. “Unfortunately, we have been very poor at that.” Testing and quarantine have only been mandatory since Feb. 22 in Canada, which has allowed variants to enter the country. And since that date, 30 per cent of travelers arriving by air have been exempted from a mandatory stay in a government-authorized hotel, according to the Public Health Agency of Canada. Crew members, foreign students and diplomatic personnel are among those entitled to exemptions.

Poor contact tracing of confirmed cases in the country is another factor. Figures from the Public Health Agency of Canada show half the time the source of the infection is unknown, Lee said.

According to Lee, an expert in cross-border pandemic response, there needs to be a co-ordinated strategy between international, inter-provincial and intra-provincial movements rather than trying to plug one hole at a time. “We don't need to become North Korea,” she said. “We don't have to get to zero. But we have to dampen it down so the vaccination can keep pace. We need to buy time. We can buy ourselves time, get more people vaccinated, get the children vaccinated, so by the fall we don't have a fourth wave. This is not over by any means. Vaccines alone won't get us out of this."

The data analyzed in this story was provided by FlightRadar24. This global air traffic tracking service provided data on all planes that landed in Canada between Jan.1, 2019, and April 30, 2021, for a total of 3.6 million flights.

Out of transparency and journalistic integrity, we make our entire analysis public. Click here to consult it.

The images and textures of the globe come from JHT's Planetary Pixel Emporium.

Do you have public interest data that you want to send us? Write to nael.shiab@radio-canada.ca. To send an encrypted email, download this PGP key.

Read more of our visual stories 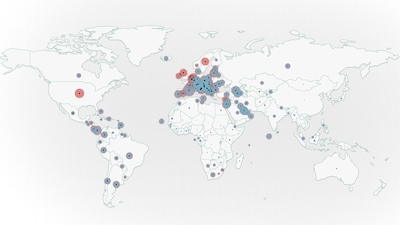 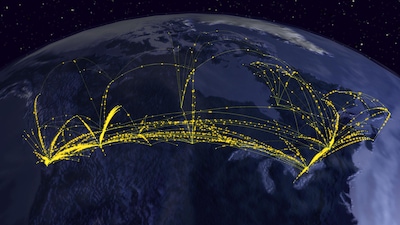 Domestic flights: when provinces infect each other 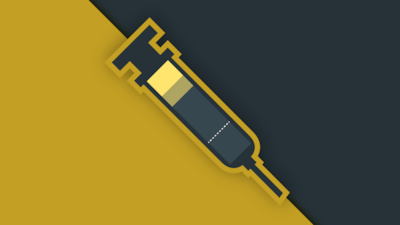 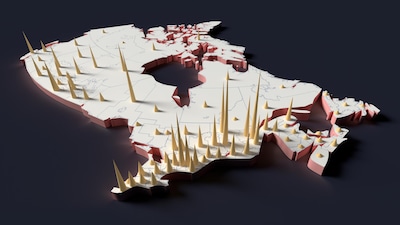 Two parts of a pandemic: How the coronavirus spread in Canada 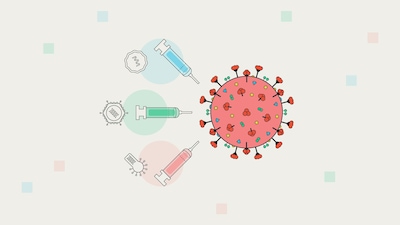 How vaccines work against SARS-CoV-2 (and its variants) 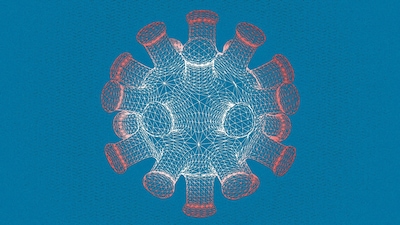 The state of the pandemic 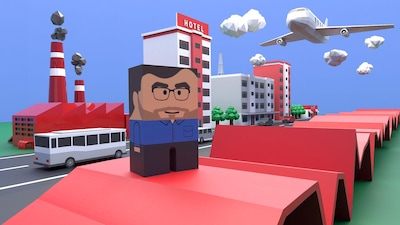 The Economic Impact of COVID-19 in Canada 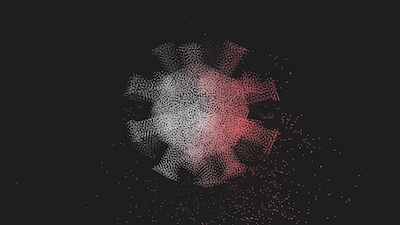 Who has died from COVID-19 in Canada? 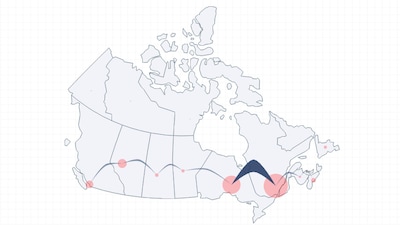